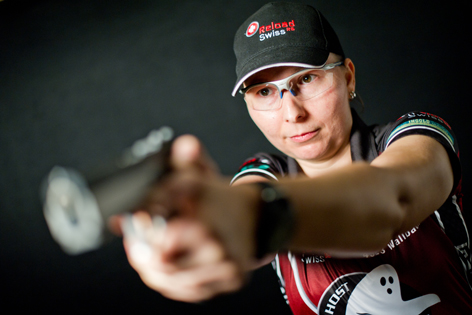 Christine was born on 23 September 1977 in Burgdorf. After graduating from high school, she began a commercial apprenticeship programme with the municipal government in Heimiswil. At Interdiscount AG in Jegenstorf, she spent nine years gaining experience and honing her skills in the in the field of finance. Since 2007 she has been with a trust company in Münchenbuchsee, responsible for the accounts of various companies.

Prior to 2007, Christine had very little to do with shooting, apart from taking part in a 300m shooting course for young people. She learned about dynamic IPSC shooting by coincidence from a colleague, which made a lasting impression on her. She has been intensively training ever since, participating in various competitions at home and abroad. Besides gaining three Swiss championship titles, her most successful moment to date in dynamic shooting came when she took third place at the European Championship in Portugal in 2013 – and of course becoming Vice World Champion in the Production Division in Florida in 2014. In 2016 Christine won the European Championship.