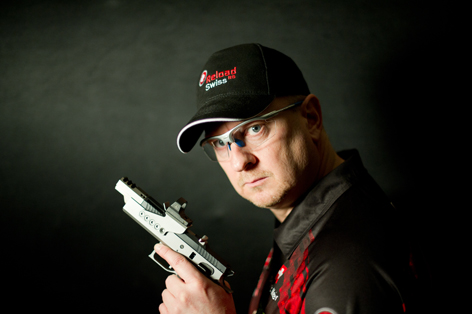 Dominic was born on 8 August 1969 in Bern. After completing school, he underwent vocational training as a machine mechanic at the automotive company AEBI in Burgdorf, and worked in customer service after performing his military service. In 2007 he began a new career, becoming a financial services manager with Swiss Life, where he continues to work in sales, serving corporate and private clients alike.

He discovered his passion for shooting at an early age. Starting with an air rifle and later moving on to 300m precession shooting, Dominic discovered dynamic IPSC shooting in 1992. Thanks to his good results, he was invited to join the Swiss national team at the end of 1993, which he still belongs to today. With seven championship titles to his name and over a hundred wins in national and international competitions, Dominic is one of the most successful IPSC shooters in Switzerland.